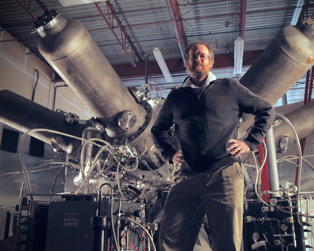 Clean, safe and unlimited power has been an obsession of scientists and inventors for centuries. Since the 1940s, when we first understood how the Sun creates energy, nuclear fusion has been energy’s Holy Grail. However, for many years, fusion has been delayed and thwarted by failure, miscalculation, fraud and politics.

But could we now be on the brink of at last producing an ‘artificial Sun’ here on Earth? Thirty-seven countries are currently collaborating to build the biggest experiment ever, ITER (International Thermonuclear Experimental Reactor), to prove that fusion is viable.

Let There Be Light chronicles the work of the passionate scientists who are struggling to make the breakthrough that could alter the course of human history.

The screening will be introduced by Professor Miles Turner, Director of the National Centre for Plasma Science and Technology. Presented in association with Science Gallery at Trinity College Dublin.