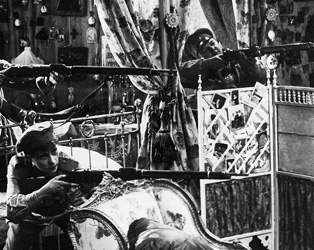 IFI AND THE EMBASSY OF FRANCE IN IRELAND PRESENT A SCREENING OF THE RUSSIAN REVOLUTION THROUGH ITS FILMS ON THURSDAY, JANUARY 25th, AS PART OF THE FIRST NIGHT OF IDEAS EVENT IN IRELAND.

January 17th 2018: The Irish Film Institute, in association with the Embassy of France in Ireland and Institut Français, is delighted to present the first-ever Irish Night of Ideas event, a screening of Emmanuel Hamon’s The Russian Revolution Through Its Films, on Thursday, January 25th. This year’s Night of Ideas, a worldwide initiative spearheaded by Institut Français that celebrates the constant stream of ideas between countries, cultures and generations, will focus on the theme of ‘Power to the Imagination’.

The two decades following the Russian Revolution were marked by a collective of young people who profoundly influenced Russian Cinema. This artistic revolution was led by directors, actors, technicians and poets, and Hamon’s documentary tells the story of this period through films produced between 1917 and 1934. We catch a glimpse of their fight for a new society, where creative freedom was of utmost importance, and of a utopia which would be brought down by an authoritarian power impacting cinema as much as the rest of society.

This Irish première will be followed by a panel discussion featuring director Emmanuel Hamon, screenwriter Thomas Cheysson, Dr Ailise Bulfin of UCD, and Donald Clarke of The Irish Times that will explore the use of images and technology as agents of social and political change.

Tickets for this screening are available here or from the IFI Box Office on 01-6793477.

For more information including interview availability please contact Michelle McDonagh at the IFI Press Office on 01-6795744 or mmcdonagh@irishfilm.ie. Additional details are available from here.