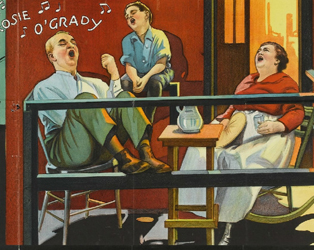 IFI INTERNATIONAL TO HOLD EVENTS IN UK FOR GB18

The Irish Film Institute, as part of Culture Ireland’s GB18 initiative, will present a new year-long programme of Irish film screenings across the UK.

The events begin on February 25th at the Glasgow Film Festival with The Near Shore: A Scottish and Irish Cine-Concert. This collection of films presents alternating perspectives on Scotland and Ireland with lively accompaniment by Irish musicians; the collection will also screen at Dundee Contemporary Arts on February 26th.

The Near Shore programme will feature Them in the Thing, a science fiction film made in Castle Leslie, Co. Monaghan by Desmond Leslie of the aristocratic Leslie Clan of Scotland, alongside a programme of short films including Ireland by Air (1933) starring Scottish aviatrix Winnie Drinkwater, and a medley of 1950s Butlins holiday films by John Tomkins, accompanied by renowned avant-garde free-improvisational pianist Paul G. Smyth.

The Near Shore will also include The Farm Below the Mountain (1958), a film made by Scottish amateur Ernest Tiernan in Co. Leitrim, will be accompanied by Leitrim-based musicians Patrick Carayannis, Rodney Lancashire and Seamus Hernon. Speaking about the film, Carayannis commented, ‘We had the privilege to meet and interview filmmaker Ernest Tiernan and members of the Durkin family who featured in the film and they gave us a great insight into life in rural Ireland before modernisation. This, along with our Sligo/Leitrim accented score, brought about a nice tribute to the cultural connection that exists between the NW of Ireland and Scotland. We are excited to bring this project to Scotland from whence it took off some 60 years ago.’

Further archival film programmes will be presented throughout the year in collaboration with The National Library of Wales in Aberystwyth in June, and with North West Film Archive at HOME Manchester in November. IFI International will also work with leading moving image artist distributor LUX films to present a programme of new Irish Moving Image Artist work curated by Alice Butler.

For more information including interview availability please contact Michelle McDonagh at the IFI press office on 01-6795744 or mmcdonagh@irishfilm.ie.

These screenings are supported by Culture Ireland GB18.