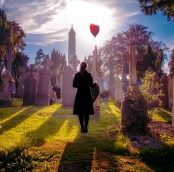 March is the busiest time of year for IFI international. This year more than 50 Irish films (new and classic) drawn from the  IFI Irish Film Archive and elsewhere will screening at over 20 events in 16 countries celebrating Irish cinema for St. Patrick’s Day. Irish films have been subtitled in Russian, Serbian, Ukrainian, Italian and Spanish. Highlights include annual events in Berlin, Belgrade, Boston, Kiev, Moscow, and Rome, and new programmes launching in Sydney, Ottawa, Denmark and Mexico.

The 8th edition of the Irish Film Festa Rome  (26th – 27th March) features Irish language films including An Bronntanas and Rubaí, award-winning Patrick’s Day, 15 shorts in competition and a tribute to Lenny Abrahamson screening Adam & Paul, Garage, What Richard Did and Frank. The St. Patrick’s Day celebrations in Berlin continue to grow and this year ‘Shebeen Flick‘ (11th – 17th March) presents German premieres of Standby, Pilgrim Hill and Gold and classics I Went Down and a 25th anniversary screening of My Left Foot. A real treat for audiences will be a rare opportunity to see the silent Come on Over (1922) (acquired by the IFI Irish Film Archive from MoMA, New York in 2012) at the historic Stummfilmkino Delphi with live musical accompaniment. In Denmark we are working with our FIAF (International Federation of Film Archives) colleagues at the Danish Film Institute to host an Irish film season (5th – 15th March) with The Pipe, Good Vibrations, Rocky Road to Dublin and Calvary in partnership with the Embassy of Ireland in Denmark.

The Irish Film Festival in Moscow (11th – 22nd March) this year has expanded to include a documentary strand with classics such as Waveriders, Rocky Road to Dublin and the recent hit One Million Dubliners. Highlights include the Russian premiere of Song of the Sea, Jimmy’s Hall with actress Aisling Franciosi in attendance and a screening of Broken Song with guest rapper Costello who will also perform two concerts during the festival.

The Irish Pub director, Alex Fegan, travels to Kiev for the 5th Molodist Kyiv Irish Fest (12th – 18th March) which is also showing comedies Life’s A Breeze, Standby and The Stag. The third Belgrade Irish Fest (14th – 24th) opens with Frank and features the classic titles Angel and Once. We are pleased to present a major retrospective of Irish cinema (12th – 19th March) with the Embassy of Ireland at the prestigious Cineteca Nacional, Mexico. The programme includes Song of the Sea, Price of Desire, Calvary, His & Hers and In the Name of the Father.

Meanwhile the Irish Film Festival Boston (19th – 22nd March) is in its 15th year and presents over 30 films. The Festival’s award winners have already been announced and include Best Feature award winner Gold, with director Niall Heery in attendance and the special Jury Prize winner An Bronntanas. Documentaries include Blood Fruit, and Directors Choice Award winner One Million Dubliners which will be presented by director Aoife Kelleher and producer Rachel Lysaght.

Further North in Canada we will work with the first Irish Film Festival Ottawa (27th – 29th March) introducing new audiences to the best of Irish cinema with Song of the Sea, The Stag, Pilgrim Hill, Song of the Sea, An Píopa (The Pipe) and Kisses.

We have new partners this year in Australia where  the inaugural Sydney Irish Film Festival(26th – 29th March) will present Australian premieres of Out of Here, Living in a Coded Land, and director, Paula Kehoe, will present An Dubh ina Gheal (Assimilation) about the connection between Irish and Aboriginal people in Australia.

In all, it’s a huge global celebration of Irish film. So, wherever you are in the world there could well be an opportunity to see great Irish films brought to you courtesy of IFI International and its world-wide network of exhibition partners. For a full events listing, see our international calendar here.