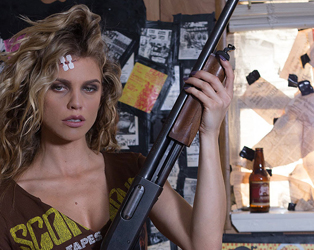 AnnaLynne McCord (Excision, 2012) plays Liza, a former stripper who persuades her boyfriend, sewer worker Chip, to help her steal $68,000 from her landlord’s home.

When the plan goes wrong, the two flee the scene with Violet, unanticipated witness and now hostage. When he discovers Liza’s plans for Violet, Chip tries to rescue the girl, with his girlfriend in pursuit. Laced with black humour, this is a true midnight movie.