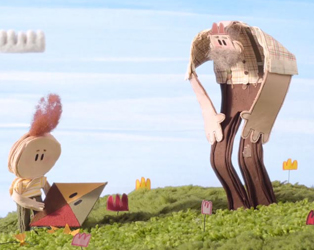 For the second IFI Family @ First Fortnight event, we have this programme of specially chosen international short films.

The White Crow (Bijela Vrana)
Little White Crow is made fun of by the other birds for being different. But when pollution causes great changes in their environment, it is the little White Crow who helps the flock find a better home.
Croatia/2018/Director: Miran Miošić /Duration: 9 mins

Traces
Over the seasons we follow a logger and his horse in the depths of the Ardennes Forest, and see him lives his love of nature through the eyes of a mysterious young girl.
Belgium/2018/ Director: Sébastien Pins/13 mins

Daffodils
Pebbles is a lonely creature in ancient Ireland who’s quiet life is turned around when her new neighbour attempts to win her affections.
Ireland/2019/Director: Aisling O Connor/3 mins

Boje
Boje, is a young boy who is living on the coast with his father Holke, has a lot of questions in his mind that are not that easy to answer. Nothing would make Holke happier than answering his son’s complex questions, but he is literally missing the right words. Eventually he turns to the sea for help…
Germany/2019/ Directors: Andreas Cordes & Robert/10 mins

The Kite (Poustet draka)
A little boy visits his old grandfather in the countryside and they fly a kite together. They are both made out of layers, which symbolize their age. As the granddad gets older, he also gets thinner, and at the end of his life, he is as thin as a sheet of paper. One day, the autumn wind blows him away and takes him up to the sky…
Czech Republic, Slovakia, Poland/2019/Director: Martin Smetana/13 mins

Mr. Angry Eye and his Bump
Mr. Angry Eye overlooked a wall. Now it’s happened: A fat bump grows on his forehead. Will he ever be happy again?
Germany/2019/Director: Agnieszka Jurek/2 mins

Wolf Paths
A young boy suffers from asthma. His peaceful, lazy life with his mum changes when his inhaler falls off the window. The boy is forced to leave his home and on his way he meets a wild wolf. His curiosity gets the better of his fear, allowing him to experience a wonderful adventure and do the things he could only have dreamt of.
Czech Republic/2018/Directors: Noemi Valentiny, Vojtech Dockal/10 mins

Matilda
Matilda can’t get to sleep and starts playing with her bedside lamp until the lightbulb finally burns out. She finds herself plunged into darkness! She soon overcomes her fear and, using her torch, starts exploring her room in this new light, and discovers all the magic of the night.
France, Spain, Belgium/2018/Directors: Irene Iborra, Eduard Puertas/7 mins