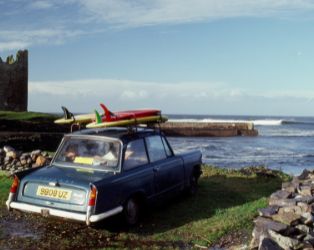 Keep It A Secret recounts the inspiring true story of the dawn of Irish surfing and how the sport’s brave pioneers found peace in the surf during the most violent years of The Troubles.

In 1972, every international sporting event in Ireland was cancelled, except for one. Teams from around the world refused to travel to Ireland amid the height of The Troubles. But a dedicated band of surfers in Dublin and Belfast transcended political hostilities to host the 1972 Eurosurf Championship in Lahinch, Co Clare.

In his feature debut, Brooklyn-based Seán Duggan, packs a lot of beautiful archive, political backdrop and lively reminiscence into a well-paced hour. The film reveals how surfing gave an exceptional collection of young people hope at a time of despair and how the tight-knit, rebellious community they formed would inspire generations to come.

This screening will be followed by a Q&A with Kevin Cavey, the godfather of Irish Surfing.