Chinese filmmaker, screenwriter and producer Wang Xiaoshuai (So Long, My Son) brings together documentary, painting and photography in this fascinating ten-year visual account of his native land filmed in places rarely seen, during a period of tremendous change.

Travelling from eastern cities Beijing and Shanghai, and to northwestern areas where nomadic live abounds, Wang simply filmed what he saw: traditional villages, crumbling old factories, new construction projects, commuters on a train, tourists at the beach, and factory workers in huge workshops or immense office spaces. Through long, often almost static shots, with no dialogue, voice over or subtitles, people stare out at us, while in the background life continues unaware. 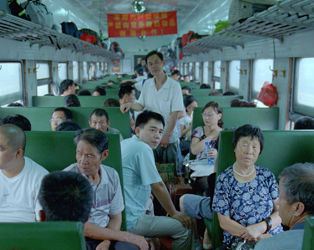