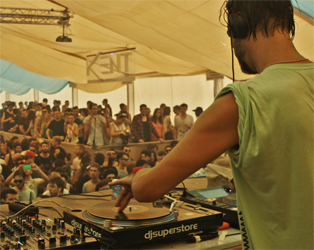 This screening is in association with science gallery at Trinity College Dublin’s SOUND CHECK exhibition, and was followed by a panel discussion.

The panel will include:
Siobhan Kane (moderator); UCD academic, founder and programmer of Young Hearts Run Free, and music journalist whose work has been published in The Irish Times, WIRE, Winter Papers, and The Quietus.
Ian Maleney; a writer living in Dublin. His work on electronic music has been published in the Irish Times, Resident Advisor & The Wire. He is founder and editor of Fallow Media.
Cáit; a DJ based in Dublin. She co-founded and is a resident at Dip. You can also find her hosting radio shows on Raidió Na Life and Dublin Digital Radio.
Dave Parle: Dave has been running clubs in Dublin non-stop since founding his first weekly night Antics at Crawdaddy in 2005. Since those beginnings he has worked on many festivals including Electric Picnic, Metropolis, Body & Soul and Forbidden Fruit as well as many venues in Dublin. He founded Hidden Agenda in 2011 as a side project but now works on this full time, programming events in District 8 and many other venues across town.

Each DJ is given space to discuss and free associate about their musical processes, delving into the history of electronic music and how it has evolved over the decades from an underground movement to achieving mainstream acceptance.

Karmakar intercuts these fascinating digressions with extended shots of each subject at work in club sequences framed to reveal both the DJs in action and the crowds’ euphoric responses.