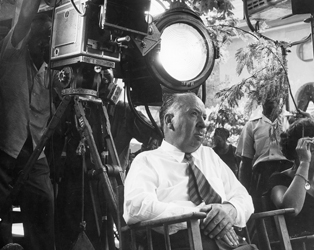 THE GENIUS OF HITCHCOCK: PART THREE

This month’s instalment of the Great Hitchcock Retrospective centres on three more of the neat thematic labels used by the British Film Institute to subdivide the rich variety of his output over 50 years. ‘Secret Agents’ speaks for itself; ‘Hitchcock’s Odysseys’ refers to the recurring motif of spectacular journeys that is brought to perfection in North by Northwest. The less obvious label, ‘Dead Funny’, points to the strong comic strain in his work, often in disturbing association with violence and death. Once again we can note, obviously as a strength rather than a limitation, how hard it is to confine a given film within a single category: Rich and Strange, for instance, classed as ‘Dead Funny’, involves a long journey, and North by Northwest is, conversely, full of humour, as well as being centred on Cold War espionage.

It continues to make sense, then, for the IFI to programme the month’s films not in strict thematic boxes, but in chronological order, again measuring out the development of Hitchcock’s work through from the silent period to the late Hollywood films. The wise words of the American scholar Paula Cohen are worth repeating: “To study Hitchcock is to find an economical way of studying the entire history of cinema.”

Introduction and notes on individual films by Charles Barr.
Our thanks to the BFI for their ongoing assistance in mounting this retrospective.