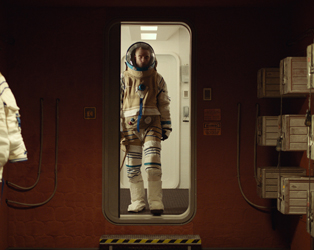 This film was released on Friday 10th  May 2019 and is no longer screening.

A group of death row inmates aboard a ramshackle spacecraft are on a mission to harness the energy of black holes for use back on Earth. Authority lies with the eccentric Dr. Dibs (Juliette Binoche) who is less interested in the mission’s success than she is in performing bizarre experiments on the crew. One of their number, Monte (Robert Pattinson), resists her investigation into how their rarefied zero-gravity environment affects human reproduction, and is consequently a source of fascination for her.

Claire Denis’s (Beau Travail, Let the Sunshine In) first English-language feature is a typically enigmatic and provocative work, which upends all science fiction genre conventions. A fascinating amalgamation of psychology, biology and quantum physics, High Life is as alien and unknowable as the depths of a black hole.