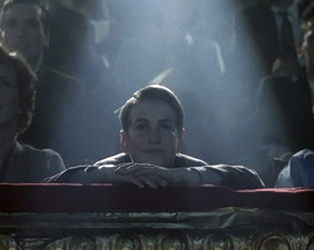 As the new cinema going year begins, we present director Paul Anton Smith’s filmic love letter to the experience. A supercut of over a thousand scenes from films in which characters go to the cinema, it follows a roughly chronological path, from the ticket queue to the experience of sitting in a darkened cinema to the exodus of patrons following the feature presentation.

Smith, who worked as assistant editor on Christian Marclay’s The Clock (2010), has brilliantly constructed the film so that characters from different films in different decades are seen to interact, often to humorous effect, or, in one wonderful sequence, share the experience of watching Fred and Ginger dance. Featuring clips from every genre, it serves as a welcome reminder of just how magical seeing a great film on the big screen with an audience can be.