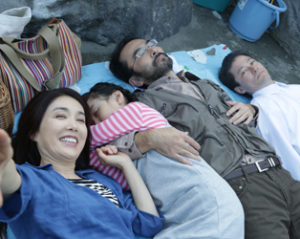 A stranger’s unexpected arrival is the catalyst for a series of unwelcome changes to Toshio’s quietly unremarkable life in Kôji Fukada’s slow burn, Hitchcockian thriller that reworks elements of the genre to winning effect. Toshio shares his small apartment with his wife and harmonium-playing daughter; they live above the machine workshop where he plies his trade.

The family appears contented if not a little distant. One day a soft-spoken, neatly attired yet slightly disquieting man named Yasaka appears and Toshio immediately offers him a job and lodgings with his family, much to their bemused chagrin. Before long however, Yasaka bonds with Toshio’s wife and offers musical instruction to his daughter, and all appears well until a series of revelations take the narrative into significantly darker territory in the film’s consistently surprising second act.