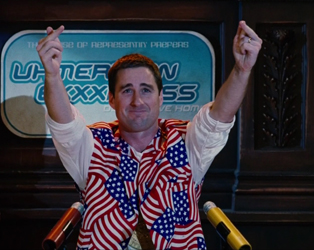 Director Mike Judge has taken a satirical approach towards the dumbing-down of society in films such as Beavis And Butthead Do America (1996) and cult favourite Office Space (1999). Here, Joe (Luke Wilson), a completely average man, is selected for a suspended animation experiment that goes wrong. Waking up centuries later than intended, he and fellow subject Rita (Maya Rudolph) find an America in which stupidity and anti-intellectualism are the norm, with humanity teetering unknowingly and uncaringly towards extinction. A film that manages to make its bleak predictions extremely funny, the film seems increasingly prescient as world events unfold. (Notes by Kevin Coyne.)