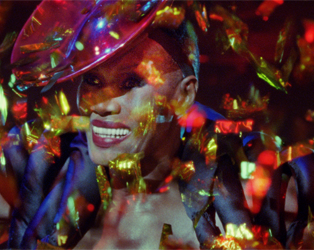 Bloodlight and Bami opens at the IFI on Friday October 27th, tickets here.

Grace Jones: Bloodlight and Bami takes the viewer on an intimate and electrifying journey that moves between four cinematic layers – performance, family, artist and gypsy – to explore the fascinating world of this pop cultural phenomenon. Here we see her behind the mask as a daughter, mother, sister and grandmother, alongside taking to the stage for a specially commissioned performance, with legendary hits including Pull Up To The Bumper and Slave to the Rhythm showcased in full. Larger than life, bordering on cartoon, wild, scary and androgynous – Grace Jones plays all these parts.