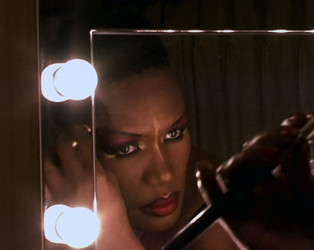 This film was released on Friday 27th October 2017 and is no longer screening.

Bloodlight And Bami – Jamaican patois for the red light of a recording studio and bread – follows the incomparable Grace Jones across the globe as she visits family in Jamaica, appears on French television, and performs in Dublin’s Olympia Theatre. Despite Jones’s varied history as actress, model, disco legend, and pop culture icon, rather than create a traditional documentary narrative recounting her past achievements using archive footage and talking heads, director Sophie Fiennes instead focuses firmly on present-day Jones, taking a fly-on-the-wall approach to her subject.

While the access gained grants Fiennes moments such as Jones discussing the brutal beatings she endured as a child, and shows her softer side as a mother, daughter, and aunt, she retains the air of mystery and severity cultivated throughout her career, and is still capable of being the full-on diva fans know and love.