A GIRL FROM MOGADISHU

The 18.15 screening on Friday 3rd will be followed by a Q&A with Mary McGuckian and Ifrah Ahmed, hosted by Bonnie Greer. This film is F-rated.

This inspiring drama of female empowerment is based on the testimony of Ifrah Ahmed, Female Genital Mutilation activist. Fleeing a forced marriage in war-torn Somalia in 2006, Ifrah (Aja Naomi King) is trafficked to Ireland where a medical examination when seeking asylum reveals the extent of her injuries as a child. Traumatised by the memory, she channels the experience into a force for change.  With support from her friend Amala (Martha Canga Antonio), and Irish politicians Emer and Joe Costello (Orla Brady and Stanley Townsend), and against opposition from community leaders, religious men and members of her own family, she emerges as a formidable campaigner against FGM at the highest political levels.

Writer/director Mary McGuckian’s dramatisation of this extraordinary story focuses much-needed attention on the scale and barbarity of FGM while finding hope in the power of individuals to empower, speak out, and effect change. The film won the Cinema for Peace Woman’s Empowerment Award at the Berlin Film Festival. 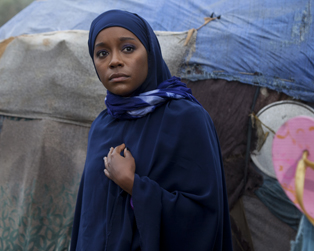