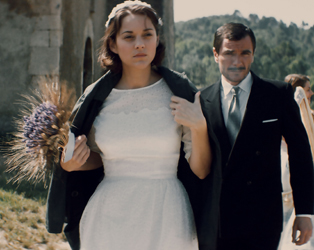 This film was released on Friday 23rd June 2017 and is no longer screening.

Actress/director Nicole Garcia’s adaptation of Milena Agus’s novella features another wholly immersed performance from Marion Cotillard as Gabrielle, a rebellious spirit in post-WWII France. Beginning in the 1950s, Garcia presents an extended flashback to 1940s Provence where Gabrielle’s flagrant disregard for social norms leads her harried parents to give her an ultimatum: choose marriage or the madhouse. The family strikes a deal with Spanish farmer José (Alex Brendemühl) whom they will set up in business if he agrees to take her off their hands.

Despite his clear affections, Gabrielle vows to never return his love and makes it known from the outset that she will seek satisfaction elsewhere. Ill with kidney stones, she is sent to a Swiss spa where she meets André Sauvage (Louis Garrel), a veteran of the Indochina war, with whom she forms a dangerous attachment.