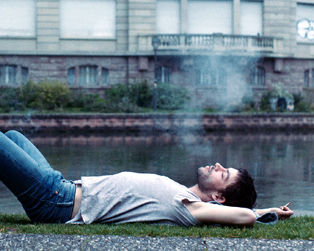 22-year-old Léo (Félix Maritaud) is a rent boy on the streets of Strasbourg; an enigmatic figure, he is by turns a streetwise hustler and a lonely boy lost, craving non-transactional intimacy. Léo is sick with unrequited love for the handsome Ahd (Eric Bernard), one of the fraternal group of fellow prostitutes he hangs with, who counsels him to find a wealthy older man as a means to escape to a better life. This bracing first feature by writer-director Camille Vidal-Naquet balances raw authenticity with striking moments of profound tenderness and compassion.

Director’s Note: Both crude and sentimental, a quest for love amidst the cruel realities of male prostitution displays intense acting from Felix Maritaud.