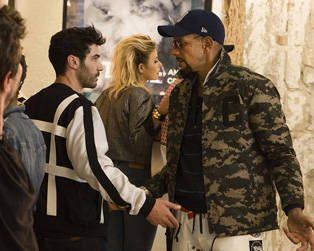 Brahim Mecheri, the new comic sensation, comes from a North African working-class family in the Parisian suburbs. His rising fame begins to erode the bond with his elder brother, Mourad, who has supported him all along as manager, agent, producer, lawyer, bodyguard and driver. But if Mourad is indeed a dedicated brother prizing loyalty and family above all, he is also manipulative and starting to make questionable career decisions for Brahim. Co-written by Rebecca Zlotowski (Grand Central), and carried by an excellent triptych of actors (Tahar Rahim, Roschdy Zem and Maïwenn), this is sleek, seductive, powerful mainstream cinema.

Director’s note: A fast-moving tale of family alienation, blood ties and emotional traps, and the passionate break-up between two brothers in the world of showbiz.

The 14.00 screening on Sunday, November 26th is our November French Film Club screening, where tickets for Alliance Francaise and IFI members cost just €7.50.