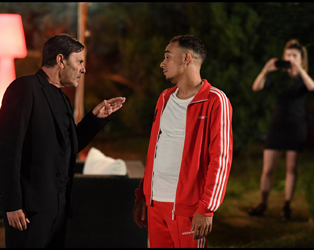 Director, writer and star Agnès Jaoui (I Got Life! and last year’s Festival guest of honour) reunites with her regular collaborator Jean-Pierre Bacri for this droll comedy of manners set over the course of one eventful high-society soirée. Bacri plays Castro, the curmudgeonly host of a popular TV show who has been invited to the country mansion of his producer Nathalie (Léa Drucker) for a housewarming party. Also in attendance are his ex-wife Helene (Jaoui), who happens to be Nathalie’s sister; and his current girlfriend and daughter, whose newly published book has characters that seem worryingly familiar to her parents.

Director’s Note: Attentive insights on the frailty of human nature, fame, old age, love in this new comedy by the Jaoui/Bacri duo.