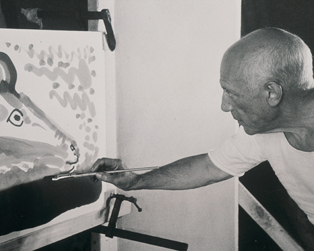 Winner of the Special Jury Prize at the Cannes Film Festival, this invaluable document allows us to watch Picasso at work, and explore his methods and inspiration. Picasso paints on glass while the camera films from the other side. From black-and-white drawings to colourful creations destroyed by the end of the film, the paintings exist only through the recording. The French government declared Clouzot’s film a ‘national treasure’. The radiant photography is from Claude Renoir (son of filmmaker Jean Renoir, grandson of painter Pierre-Auguste) and music by Georges Auric.

This screening will be introduced by Seán Kissane, Curator, Exhibitions, Irish Museum of Modern Art.