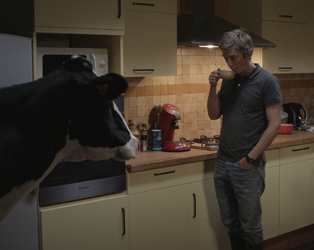 Pierre (Swann Arlaud) a thirty-something bachelor is a solitary character. Obsessed with his work as a dairy farmer on the family farm which he inherited deep in rural France, his life revolves around his 30 cows, his parents, his sister, the local vet, and occasional social life with his friends. With the outbreak of an epidemic, one of his cows is infected, but Pierre will do anything to save his herd. Charuel shifts brilliantly from naturalistic portrayal into dark psychological thriller playing with the codes of the genre.

Director’s Note: The dreamlike opening scene sets the tone for this film: audacious, eerie and affecting.