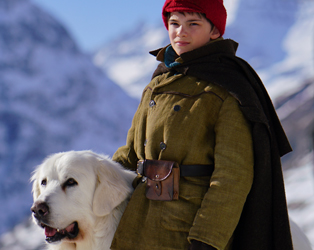 The hugely successful French family film trilogy, adapted from the much-loved novel by Cécile Aubry, features young Sebastian and his rescued dog, the Great Pyrenean, Belle. Having won many hearts with the first two stories of adventure and bravery, this final chapter sees the 12-year-old boy deciding not to follow his father to Canada, so he can stay in snow-covered Saint Martine to watch over Belle and her three new pups. The arrival of bad guy Joseph, claiming to be Belle’s rightful owner, kick starts another terrific Alpine tale where Sebastian and his bumbling-but -loving grandad, set out on a quest to save their dog.

Age recommendation: 8+; subtitles will be read by an experienced reader.