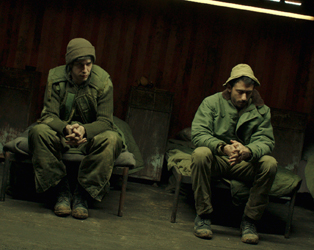 Samuel Maoz’s highly anticipated second feature delivers on the promise of his debut, the claustrophobic 2009 war drama Lebanon, which was distinguished by being set entirely within the confines of a tank.

The first act of Foxtrot is similarly confined to one space, the well-appointed apartment of Michael and Daphne Feldman (Lior Ashkenazi and Sarah Adler), stunned parents who have just received the awful news of their son’s death ‘in the line of duty’ at a border shooting incident. The unfeeling bureaucracy of the officials who deliver the news is chillingly portrayed.

Fate intervenes in unexpected ways and the plot thickens considerably in Maoz’s cruel, brilliant drama that is told with a streak of mordantly absurd humour. His confidence with camera movement and composition in cramped spaces reveals a true cinematic sensibility.