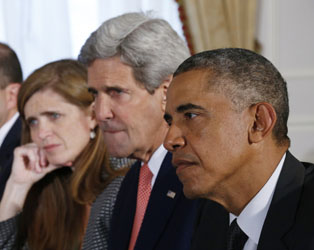 This film was released 19th January 2018, and is no longer screening.

During 2016, documentary filmmaker Greg Barker was granted access to key members of outgoing US President Barack Obama’s administration – Secretary of State John Kerry, US Ambassador to the United Nations Samantha Power, speechwriter Ben Rhodes, and others – for an unprecedented look at the shaping of US foreign policy.

Barker was permitted a 90-day shoot that culminated just hours before Donald Trump’s inauguration and, in that period, he follows his subject to no less than 21 countries, capturing events such as the Syrian peace negotiations, the implementation of the Iran nuclear agreement, and Obama’s historic speech at Hiroshima. Samantha Power’s trip to Africa in the aftermath of Boko Haram’s abduction of hundreds of schoolgirls and her tearful speech to a group of US immigrants are especially memorable sequences in a surprisingly moving film.