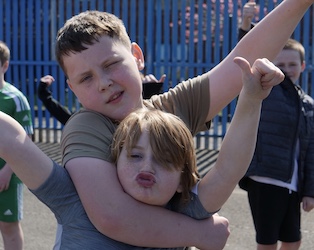 This screening will be followed by a Q&A with co-Director Declan McGrath and Kevin McArevey, Headmaster of Holy Cross Boys School.

An observational documentary set in a primary school in Belfast’s Ardoyne, where a marginalized community has for generations been plagued by poverty, drugs and guns. This film charts the dream of pioneering Headmaster Kevin McArevey of the Holy Cross Boys School to show how critical thinking and pastoral care can empower and encourage 4 – 11 year old children to see beyond the boundaries and limitations of their own lives. We see how philosophy can encourage them to question the mythologies of war and of violence, sometimes challenging the narratives that they have grown up with and equipping them with new ways of negotiating with their peers.

Co-directors Neasa Ní Chianáin (School Life) and Belfast native Declan McGrath (Lomax in Éirinn) chronicle the daily lives of charismatic McArevey and his team as they create an oasis of hope and respect for the pupils and their parents in the face of overwhelming odds.