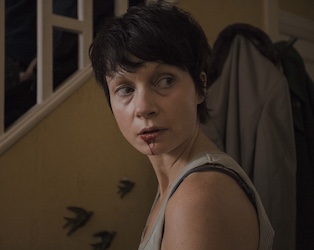 This screening will be followed by a Q&A with director Kate Dolan, moderated by Dr Sarah Cleary.

Teenager Char and her mother, Angela, share a house with grandmother, Rita. Relations are fraught as Angela’s poor mental health and erratic behaviour cause Rita to become increasingly impatient and Char to isolate from her bullying classmates. When Angela disappears overnight, she is so oddly unfamiliar upon her return that Rita and Char fear that she has been switched by malevolent forces. Things reach a fiery climax on Halloween night, when Char realises she is the only one who can save her mother, even if it means losing her forever. Writer/director Kate Dolan’s feature debut, assured in its low-key depiction of dysfunctional family life explores mental illness and the myth of the changeling in this genre-bending psychological drama. A powerful cast of women – Ingrid Craigie, Carolyn Bracken and Jordanne Jones – is led by Hazel Doupe who is quietly remarkable in the central role of stoic teen.