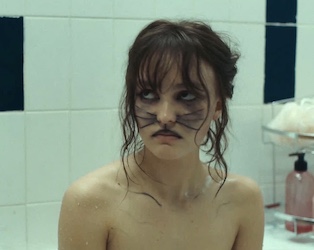 This screening will be followed by a Q&A with director Nathalie Biancheri, hosted by Tara Brady of The Irish Times.

Tickets for the film’s wider release are on sale here.

Jacob (George MacKay) suffers from species dysphoria, feeling himself to be a wolf trapped in a man’s body. In the hopes of overcoming his condition and assimilating back into his family and society, he voluntarily enters into a care facility for those similarly afflicted, including a young man (Fionn O’Shea) living as a German Shepherd, and a young woman (Lola Petticrew) in parrot garb. Here, they are watched over by a caring therapist (Eileen Walsh) and the ’Zookeeper’ (Paddy Considine), a lion in sheep’s clothing whose seeming empathy masks a Nurse Ratched-style cruelness. When Jacob meets a kindred spirit in long-term resident Wildcat (Lily-Rose Depp), he must decide who he wants to be. MacKay gives a performance of feral physicality in a film reminiscent of Yorgos Lanthimos’s work in its mixture of pathos and dry humour.