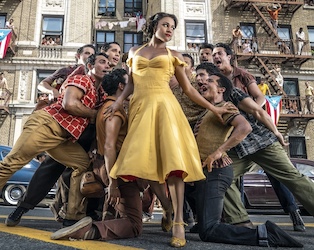 Set against backdrop of demolition and gentrification of 1960s New York, the now infamous rival gangs the ‘Jets’ and the ‘Sharks’ return for Steven Spielberg’s latest remake of ‘West Side Story’. Adaptions are often the victim of immediate comparison but there is no need for concern on this occasion as Spielberg and musicals appear to be the perfect match. The latest version is a cinematic treat, combining spectacular sweeping camera shots with detailed choreography, while still respecting both the 1961 film and original Broadway musical. Actress Rita Moreno returns in a new role, and Leonard Bernstein and Stephen Sondheim’s familiar Broadway tunes are delivered with new energy and colour that bounce off the big screen.

Like to sing?
Join our Wild Strawberries Choral Group for Bealtaine, in association with Chamber Choir Ireland. No experience required, just 3 workshops in May and a performance in the IFI on May 27th.
Email amcgivern@irishfilm.ie or drop your name and phone number into IFI Box Office.