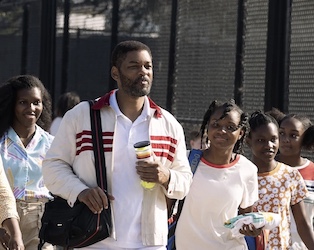 Get your new year off to a sporting start with this biopic on the tennis superstars, Venus and Serena Williams, and how they achieved world champion status under the coaching of their father, Richard.

Will Smith leaves off some of his familiar comic tics for this portrait of the determined father, insisting his daughters aim to be the best, despite the family’s lack of means and an absence of diversity in the sport. Arguing with coaches, his wife, and the girls themselves, and focusing on old fashioned values, he has huge confidence in his daughters, while his wife reminds him that it’s a family affair, not his alone. With some great performances and high octane on-court scenes, King Richard will have you cheering from the sidelines.