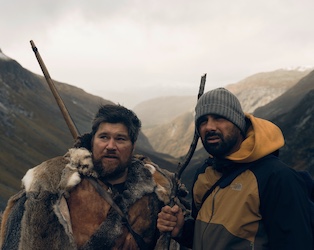 In a desperate attempt to overcome his midlife crisis, Martin (Rasmus Bjerg), has fled what he perceives to be the emasculating strictures of society to live in a Norwegian forest as an ersatz hunter-gatherer wild man. Hilariously ill-equipped to live off the land, the deadly serious Martin, dressed unironically in his homemade Viking costume, wanders the forest, foraging what he can with his bow and arrow, in a misguided attempt to regain his independence from the dehumanising shackles of civilisation. A chance encounter with an injured drug smuggler, Musa (Zaki Youssef), is the catalyst for a series of events that see the unlikely duo pursued by the police, gangsters, and Martin’s understandably frustrated wife, who has driven from Denmark with their two children and pet rabbit in tow.