WHERE IS ANNE FRANK?

This film will screen from Friday, August 12th.

Anne Frank’s Diary of a Young Girl, written between 1942 and 1944 when she was in hiding with her family during the Nazi occupation of the Netherlands, is one of the most celebrated and widely read books of the 20th century. Rather than being a straightforward cinematic adaption, Ari Folman’s (Waltz With Bashir) imaginative animated film uses Anne’s story as a point of departure to draw parallels to contemporary issues such as the ongoing immigration crisis. The setting is one year from now: a violent storm lashes the streets of Amsterdam, and the hordes of tourists queuing outside the Anne Frank Museum. Inside, Kitty, the imaginary friend to whom Anne addressed her diary, has materialised. We follow Kitty on her quest to find Anne in modern day Amsterdam, as episodes from her famous diary are vividly recreated. 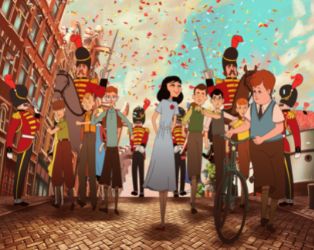