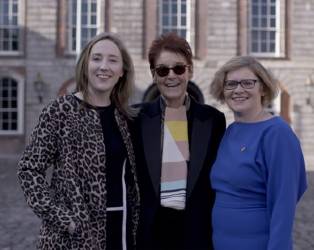 Coinciding with the second anniversary of the historic referendum which saw over 1.4m Irish citizens vote to overturn the Irish Constitution’s controversial 8th amendment, the film tells the emotional inside story of the Together for Yes campaign. In the aftermath of the tragic death of Savita Halappanavar, three Irish feminists, Grainne Griffin, Orla O’Connor and Ailbhe Smyth, joined forces and set about establishing a grassroots, women-led social movement. Working with teams in every county in Ireland, they delivered a landslide victory.

Directed by Anna Rodgers, and produced by Zlata Filipovic and Hugh Rodgers, this compelling and insightful documentary recalls the highs and lows of the tumultuous campaign, and captures one of the most seismic shifts in Irish society in recent history. The film, commissioned by Together For Yes, features footage from filmmakers, campaigners and volunteers from all over the country who captured elements of this groundbreaking moment in Irish society, alongside archive material going back 35 years.