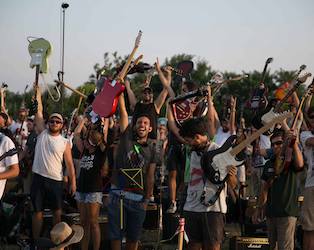 In 2016, Fabio, a marine biologist with a passion for rock music, convinced 1,000 musicians from all over Italy to gather in Cesena to play ‘Learn to Fly’, the Foo Fighters hit. His aim was to convince Dave Grohl, the leader of the band, to come and play in his town. A video clip of the performance together with Fabio’s speech was viewed over 50 million times on YouTube; soon afterwards Grohl got the message and decided to make the dream of the thousands come true by bringing Foo Fighters to play in the village of Cesena. We are the Thousand is a joyful film that explores just how far one music lover can pursue a crazy idea.