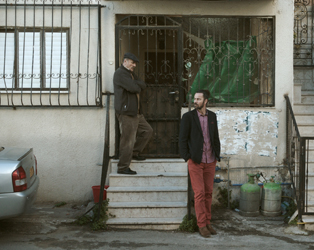 This film was released 14th September 2018, and is no longer screening.

A road movie in miniature, Wajib (which translates as ‘duty’) sees prodigal son Shadi return home to the Arab community in the northern Israeli city of Nazareth. Following local tradition, Shadi accompanies his taciturn father Abu Shadi as he drives around the streets of Nazareth in a battered Volvo hand-delivering invitations to the imminent wedding of his daughter Umal (Maria Zreik).

Real life father-and-son duo Saleh and Mohammad Bakri invest the bickering leads with naturalism and charm, the older man recognising the necessary compromises one must make to live as an Arab in Israel, whilst his son, now an architect in Italy (though his father introduces him to everyone as a doctor), embodies the politically engaged yet naïve stance of an émigré with a blinkered view of life back home.