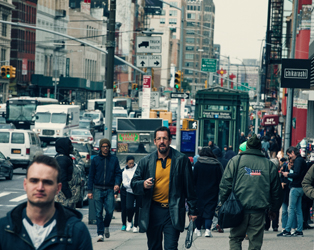 This film was released on 10th January 2020, and is no longer screening.

The Safdie Brothers follow the off-kilter dynamism of 2017’s Good Time with the similarly propulsive and intense Uncut Gems, starring Adam Sandler, who has in the past turned in impressive performances for Paul Thomas Anderson and Noah Baumbach. Here he plays Howard Ratner, a fast-talking jewellery dealer barely in control of his life, with responsibilities to his wife (Idina Menzel) and family, his mistress (Julia Fox), his business, and his loan shark creditors piling up. Adding further chaos to the mix, the rare Ethiopian opal on which he has staked both a huge amount of money and his hopes for a simpler, more relaxed future, has gone missing. Howard’s increasingly desperate attempts to retrieve the gem while attempting to keep all other plates spinning make for a remorselessly tense and gripping tale.