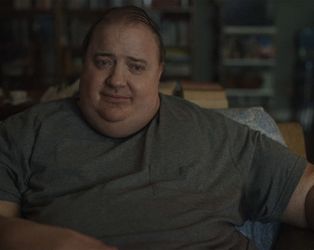 Charlie (Brendan Fraser), an English teacher, leaves his laptop camera off whilst giving online lessons as he is ashamed of his appearance; bereaved from the death of his partner, and estranged from his ex-wife and teenage daughter, Ellie (Sadie Sink), Charlie has allowed his weight problem to spiral out of control to the point where he is a morbidly obese shut-in, with a rapidly deteriorating heart condition. Refusing to go to hospital, much to the frustration of Liz (Hong Chau), his caregiver, Charlie’s relationship with food is a suicide in slow motion. When Ellie shows up unexpectedly, Charlie agrees to ghost-write her English essays in an attempt to reconnect with the angry young girl, and find some meaning in his life before it’s too late. Fraser’s deservedly praised performance elevates Aronofsky’s sensitive adaptation of Samuel D Hunter’s stage play.