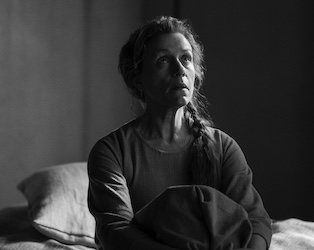 As brother Ethan leaves filmmaking for the theatre, Joel Coen’s first credit as sole writer and director sees him adapt one of Shakespeare’s greatest plays for the screen. Although The Tragedy Of Macbeth represents a significant departure from the ‘Coen Brothers’ aesthetic, it is magnificent cinema that heralds a fascinating new chapter in its director’s career. Denzel Washington and Frances McDormand, both excellent, are the couple willing to betray those most dear to them in order to ascend to the Scottish throne. As casualties mount, including King Duncan (Brendan Gleeson) and ally Banquo (Bertie Carvel), Macbeth and his Lady are increasingly overwhelmed by guilt, sowing the seeds of their own destruction. Shot in beautiful monochrome with lighting and framing redolent of German Expressionism and the best of Orson Welles, this is an exciting and valuable addition to the canon of Shakespeare adaptations.