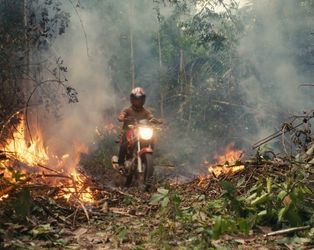 In the Brazilian rainforest, a battle is being waged between the last of the indigenous Uru-Eu-Wau-Wau tribe and the farmers and illegal homesteaders who, supported by the right-wing President Bolsonaro, are slowly eating into their otherwise protected territory. But young activist and leader Bitaté has no intention of giving up without a fight. Together with his mentor, Neidinha, he is mobilising an army of self-taught journalists to patrol the jungle and catch the land grabbers in action. With a video camera as their only weapon against the chainsaws, Bitaté and his men risk their lives to stop the clearing of the forest before it’s too late.

Produced by Darren Aronofsky, The Territory was a deserving winner of both the Special Jury Award for Documentary Craft and World Documentary Audience Awards at the 2022 Sundance Film Festival.