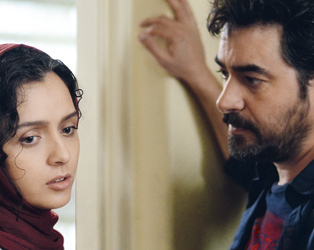 The latest from Oscar-winning Iranian director Asghar Farhadi (About Elly, A Separation) is an expertly crafted domestic drama where precise plotting and escalating tension are deftly employed to underpin the moral dilemma at the film’s core.

Rana and Emad Etesami (Taraneh Alidoosti and Shahab Hosseini) have a comfortable middle-class life in Tehran; they are also talented members of a semi-professional theatre group, currently engaged in a production of Arthur Miller’s Death of a Salesman.

Nearby, construction is causing their apartment to become unstable, forcing the couple to relocate temporarily to a shabbier dwelling where they are interrupted one night by an unruly stranger searching for the previous occupant. Violence soon erupts with unforeseen consequences as the scope of Farhadi’s teasing narrative is gradually revealed.