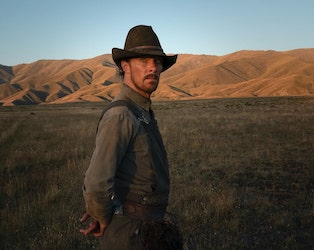 Montana, 1925; the Burbank brothers, Phil (Benedict Cumberbatch) and George (Jesse Plemons), are successful ranchers, presiding over a property at the foot of a majestic mountain range, where they raise livestock and train horses. Gentle, mild-mannered George is dominated by the college-educated Phil who, despite his degree, has rejected civility in favour of life as a hard-living, tyrannical cowboy, growing mean and spiteful as he adopts the image of a ruthless frontiersman. The simmering tension between the brothers threatens to boil over when George abruptly marries Rose (Kirsten Dunst), a widow who runs a nearby hotel and restaurant, and brings her and Peter (Kodi Smit-McPhee), her sensitive, intellectual teenage son, home to live on the ranch, where Peter immediately becomes a target for Phil’s homophobic contempt. An extraordinary study of masculinity in crisis, Jane Campion’s film synthesises nuanced performances from her leads, Ari Wegner’s breath-taking cinematography, and Jonny Greenwood’s hypnotic score, to create a truly memorable cinematic experience.