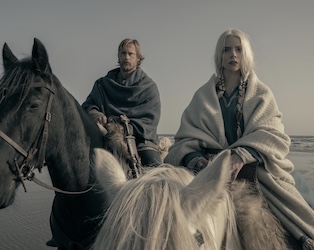 In previous films The Witch (2015) and The Lighthouse (2019), director Robert Eggers proved himself a master of world-building, with meticulous production design and the threading of idiosyncratic vernacular throughout his dialogue creating plausible worlds for his characters to inhabit. Co-written with Icelandic author and screenwriter Sjón, historical epic The Northman accomplishes a similar feat, its violent tale of vengeance unfolding in the Nordic countries at the turn of the tenth century. Following the murder of his regal father (Ethan Hawke) and capture of his mother (Nicole Kidman) by his treacherous uncle (Claes Bang), the boy Amleth flees, finding refuge with a group of pillaging Vikings. When a chance encounter reveals his uncle’s location to the adult Amleth (Alexander Skarsgård), he sets out to seek bloody revenge, aided and abetted in his uncompromising purpose by slave Olga (Anya Taylor-Joy).