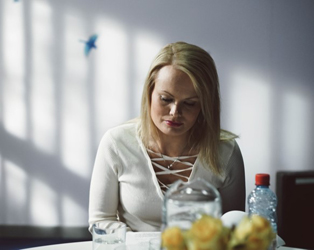 This film was released 28th September 2018, and is no longer screening.

Prolific Irish director Alan Gilsenan has throughout his career frequently addressed issues of social interest. Following the success last year of documentary Meetings With Ivor and the release earlier this year of fiction feature Unless, The Meeting blends the two forms in a dramatised recounting of actual events.

A wordless introduction offers the audience just enough detail to realise the savage violence with which a young woman was sexually assaulted, and understand the context in which, nine years later, she sought a meeting with her attacker as part of the process of restorative justice.

The film’s retelling of this encounter takes place on a single set, making for a claustrophobic, harrowing experience on which some light ultimately shines as the woman finds comfort in humanising the man across from her, and impresses upon him a greater understanding of the consequences of his actions.