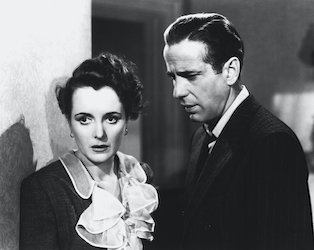 The third and definitive adaptation of Dashiell Hammett’s 1930 novel, John Huston’s directorial debut was arguably the first major film noir. In the role that defined his subsequent screen persona, Humphrey Bogart is private eye Sam Spade, a tough, taciturn, and dogged investigator who operates according to his own merciless moral code. The film’s notoriously convoluted plot sees Spade out to discover his partner’s killer before being drawn into a race to discover the whereabouts of a mysterious statue of a bird. This MacGuffin proves merely the backdrop to a succession of scenes that emphasise character and dialogue as Spade takes on the louche Cairo (Peter Lorre), the ‘Fat Man’ (the remarkable Sydney Greenstreet, making his film debut at the age of 60), and the beautiful but suspect Brigid O’Shaughnessy (Mary Astor) in this stylish, entertaining, and eminently quotable tale.