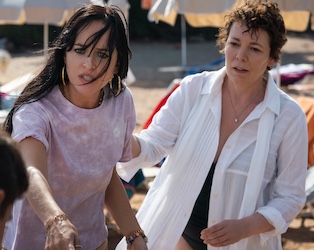 Leda (Olivia Colman), a British literature professor, is holidaying alone on a Greek island where she becomes fascinated by the disruptive presence of an extended American family, especially the intriguing Nina (Dakota Johnson), who seems uncomfortable in her role as a young mother. When Nina’s daughter goes missing, it is Leda who finds the girl, which in turn leads Leda to interrogate her own choices as a mother. Maggie Gyllenhaal’s confident directorial debut, adapted from the novel by Elena Ferrante, is a compelling study of a complex individual, whose mercurial behaviour, and unconventional attitude towards motherhood, are teasingly explored in flashbacks, where Leda, now played by Irish actress Jessie Buckley, is shown at the beginning of her career, struggling with the responsibility of raising two young girls. The film is anchored by another towering performance from Olivia Colman, who captures, seemingly effortlessly, Leda’s guarded, defiant, yet fragile nature, creating a perfectly realised, three-dimensional character.