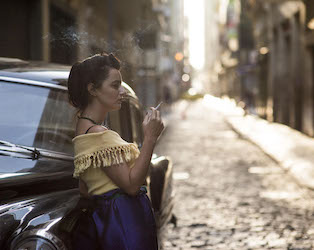 The forced separation of two sisters has consequences that echo through generations in Karim Aïnouz’s sweeping, novelistic, and thoroughly engrossing drama. The saga begins in Rio de Janeiro in 1950; eighteen-year-old Euridice (Carol Duarte) is a gifted pianist who dreams of studying music at the conservatory in Vienna. Guida (Julia Stockler), her headstrong older sister, is having an affair with Yorgos (Nikolas Antunes), a disreputable Greek sailor with whom she elopes to Athens, and as far as Euridice knows, that’s where she stays. In reality, the pregnant Guida comes back to Rio before the year is out, her marriage in ruins. Enraged by the perceived shame his daughter’s actions have wrought, Guida’s conservative father throws her out of home, forbidding her return, and spreads a cruel lie about her whereabouts to prevent the sisters from ever meeting again.