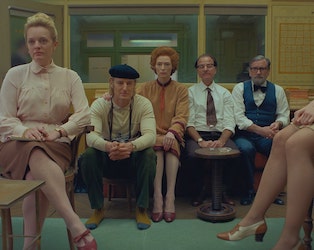 Set in a fictional French city called Ennui-sur-Blasé, The French Dispatch magazine’s team of dedicated writers (featuring Tilda Swinton, Owen Wilson, Frances McDormand, and Jeffrey Wright) each recount their stories while presenting them to their stern but fair editor (Bill Murray) as the publication goes to print. Flooded with the intricate details, slapstick, whimsical sidebars and sudden twists and turns that we have come to expect from Wes Anderson, these stories are brought to life in colourful and elegant style by an overwhelmingly large ensemble cast (featuring Anderson’s usual suspects and many new additions). Twenty-five years since the release of Bottle Rocket, this latest film from Anderson is a busy and elaborate feast for the eyes which will perhaps require a second viewing to absorb everything that has been crammed into it.