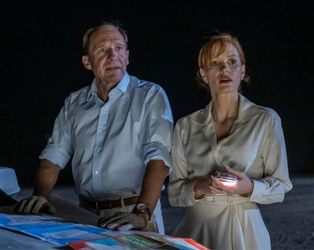 Affluent couple David (Ralph Fiennes) and Jo (Jessica Chastain) are in Morocco to attend a party in the Atlas Mountains at the lavish home of their friend Richard (Matt Smith), and his boyfriend (Caleb Landry-Jones). The couple’s relationship is strained, a situation exacerbated by David’s cynical attitude and frequent racist outbursts. Speeding and intoxicated from drinking all day, David runs over a boy, killing him instantly, a crime he will try to cover up with the help of Richard and his troupe of hedonistic revellers. The locals demand that justice is meted out in a manner that honours tradition, and David is summoned for a reckoning in the desert with the dead boy’s father. Working from Lawrence Osborne’s 2012 novel, writer-director John Michael McDonagh (The Guard, Calvary) casts a dispassionate eye over the exploits of the entitled expat super rich.