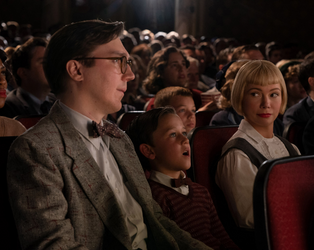 Steven Spielberg reflects upon his formative years in The Fabelmans, a poignant meditation on coming of age in a broken home. We begin with a young Sammy Fabelman re-enacting the spectacular train crash from The Greatest Story Ever Told, a seminal cinematic experience, on a toy train set, before switching to his teenage self (Gabriel LaBelle), who makes prodigiously sophisticated movies with his friends, with the tacit encouragement of parents Burt (Paul Dano), an engineer who would prefer his son’s hobby remained just that, and Mitzi (Michelle Williams), an emotionally brittle pianist. Cracks appear when Benny (Seth Rogan), Burt’s friend from work, and a de facto uncle to the kids, begins to exert a destabilising influence on the household. Reigning in his sentimental tendencies, Spielberg’s generous, empathetic film touches upon the antisemitism he experienced in school and, most touchingly, on his mother’s deteriorating mental health.